If you want a good holster, find a good shooter who makes a holster. It may not always be true, I suppose, but usually, it is. Spencer Keepers is one of those guys. Before he was a holster maker, he was a shooter looking for a good holster, specifically an AIWB holster. Back in those days, it meant getting on someone’s waitlist and waiting…and waiting. Instead, Spencer figured out what he needed in a holster and went to work, making it come true, with a holster that eventually came to be called the Keeper.

What Is The Keeper

The Keeper looks a bit out of place in today’s world of vacuum-formed holsters with really high levels of definition, because there isn’t much definition on the Keeper. Perhaps by design or perhaps just because. Even without the definition, though, there is a defined “click” as the gun is seated into the holster, and retention is good. Don’t let the lack of crisp molded construction turn you off. The Keeper from Keepers Concealment is a holster focused on function over form.

What Else Sets The Keeper Apart?

Most holsters these days all use pretty much the same hardware or at least very similar hardware. Not The Keeper. The retention adjustment, for example, is a locking nut, and there isn’t a rubber grommet or spacer to be found anywhere on the holster. Instead of using a compressible rubber spacer to control the retention, The Keeper uses shims. The idea being that this is a more robust system that will better maintain the same level of retention chosen by the end-user. 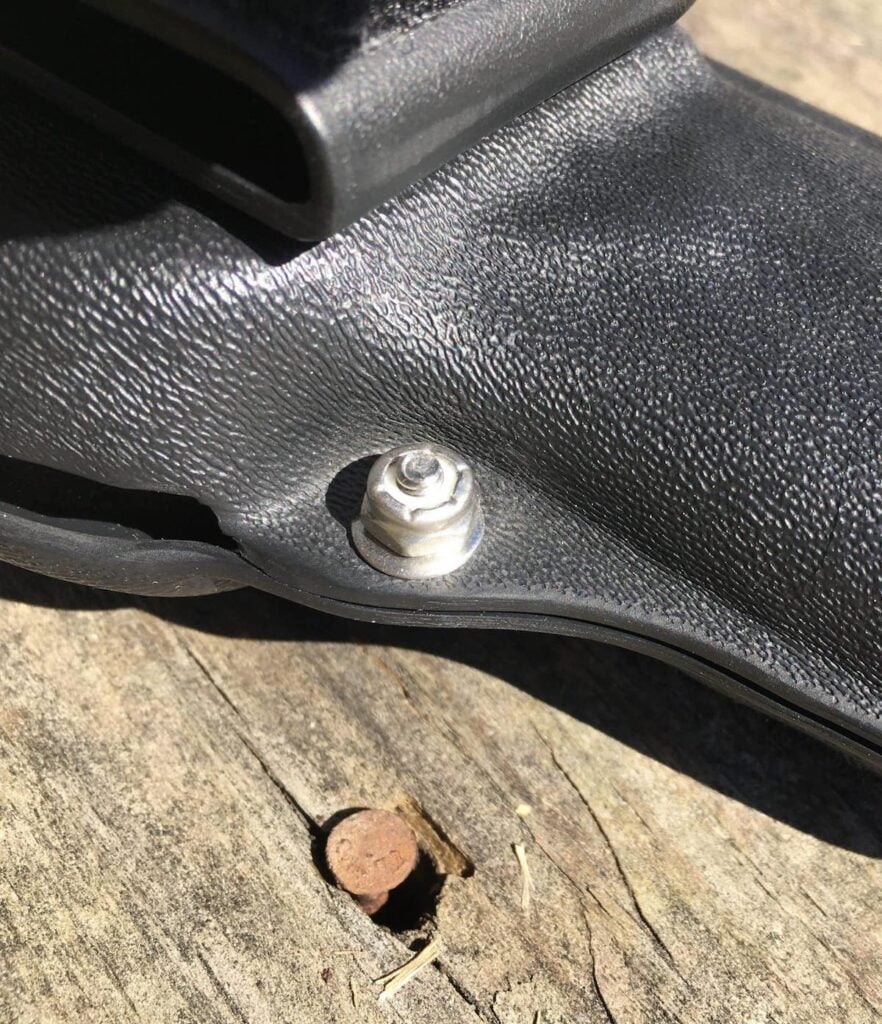 The belt attachment is different too. Usually, we see things like plastic or metal clips, or maybe soft loops with or without snaps. The Keeper, though, uses a solid belt loop formed from kydex to attach the belt to the holster. There is also a split loop version available for a bit of an extra charge. I only know of one other holster manufacturer using a solid loop on their holsters. Most people prefer the convenience of clips or snap loops, but again, the solid belt loop is a more robust and secure method.

What Makes the Holster Work

The Keeper uses two primary features to conceal the handgun it carries. At the muzzle end of the holster, the body of the holster is backed with soft loop velcro. Included with the holster are three foam wedges of varying sizes. This is not an unusual feature, at least not anymore, but most manufacturers don’t include three size options with every holster. Point to Keepers Concealment for understanding that end-users may need different size wedges.

The other primary feature built into the holster to aid in concealment is a wedge built into the body of the holster behind the belt loop. Having this wedge located where it is, as the belt applies pressure to the holster, it also turns the butt of the handgun into the body, improving concealment. This method works well enough, and maintains a slimmer overall profile for the holster, but adds thickness. Sometimes this can cause a noticeable bulge. It really depends on the body type of the person using the holster. Slimmer people may find it a bit problematic. Personally, I don’t have any trouble with it, but I generally don’t fit into the “smaller person” category.

One thing about appendix holsters that many holster makers seem to overlook is having the ability to make very fine ride height and cant adjustments. This is one of the benefits of using a hard loop as a belt attachment. The holster can allow for both gross and fine adjustments of cant and ride height. Having used holsters that needed a small adjustment to really excel, but didn’t have the means to accomplish the adjustment, this is a feature I have come to value. Greatly. The Keeper has two sets of mounting holes for gross ride height adjustment, but then built into the loop is the ability to cam one direction or the other as needed. Once the proper adjustment is found, the hardware can be locked down.

The Keeper Holster in Use

I used The Keeper for about a month as an EDC holster to carry a PX4cc. It was a loaner from Gun Culture 2.0. I am not new to this type of holster, having used the JM Custom Kydex AIWB holster, which shares many features with The Keeper. However, as I understand it, the Keeper is where many of these design features originate. At least as applied to kydex. The PX4cc is basically a Glock 19 sized handgun, and The Keeper carried it well. I did not have any issues with concealing the handgun under my normal clothing as compared to any other gun/holster combination I have used. As compared to some, I would argue it worked a bit better.

Having the fine adjustments available really matters, and being able to tweak the cant and ride height has immense value. As I suspected it would, the hard loop and wedge built into the upper part of the holster is the part of the holster/gun combo that is most likely to print through a cover garment. However, it is just that part. Even if it does print a bit, it doesn’t really look like anything of note, certainly not a gun.

Ride Hight of The Keeper

The ride height of the holster is almost perfect. There is also additional length at the muzzle end, which with shorter guns like the PX4cc, or a Glock 19, is important. There is a balance between the amount of holster/gun above the belt and the amount of holster below the belt. If there is not enough holster below the belt, the gun will be easier to push away from the body and not conceal as well. The Keeper has about an extra inch or so of length beyond the end of the muzzle of the gun, or at least it did for the PX4cc. This extra length is useful.

Related to ride height is access to the gun. A gun that rides closer to the belt will conceal better, but be harder to access. A gun that rides higher, further away from the belt, will be easier to access to harder to conceal. Having a holster that will allow the gun to carried high enough for easy access but still conceal the gun is a challenge. The Keeper pulls it off well. I felt access to the gun was exceptional, while still concealing the gun quite well.

Is The Keeper Worth it? 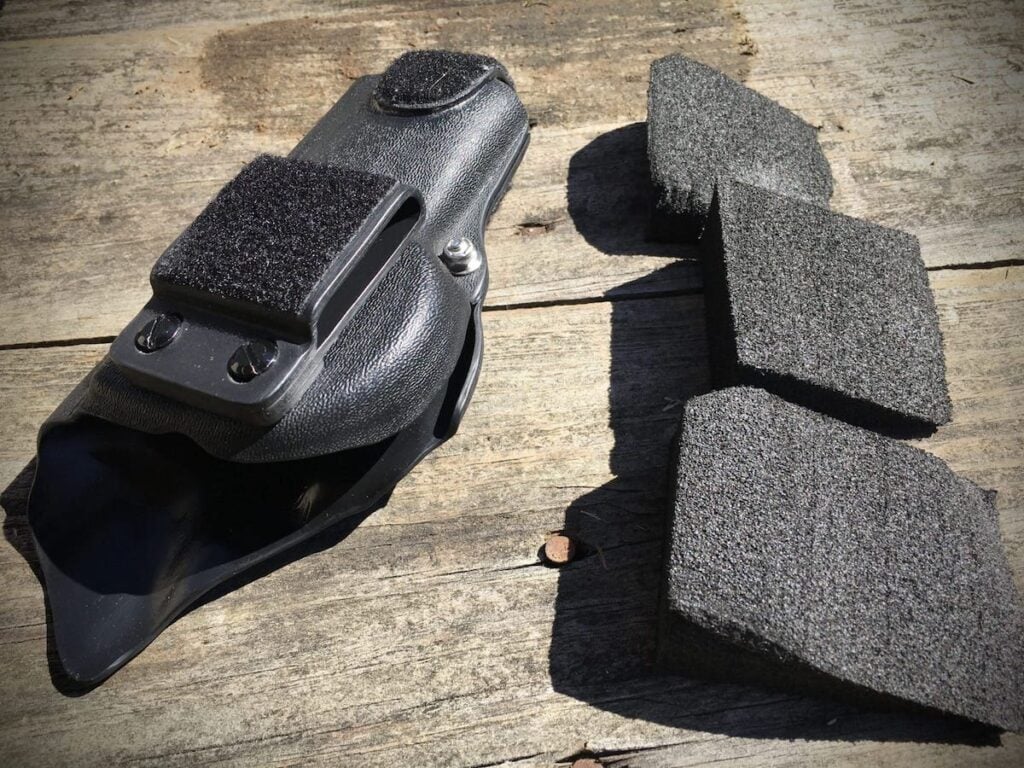 Even though the Keeper works well as a holster, it is not without issue, mainly the price relative to other exceptional holsters. The Keeper costs around $150 depending on what options a person selects when ordering. That does include a few extras not typically included with other holsters. For example, the full set of foam wedges instead of just one. But it is setting the bar pretty high still.

The question becomes, is there enough extra value in the Keeper to justify the additional cost? Even though I like the holster, my opinion, for now, is no. The Keeper is a very robust holster design with good design features that allow it to work really well. But it isn’t $50 better than other “high end” kydex holsters available on the market for around $100. That isn’t to say it is a bad holster. Because far from it, it is one of the best holsters available. But at an exceptional cost, unfortunately.

The Keeper checks all the boxes in terms of a holster that works well, is comfortable to use, and will be able to make the long haul. But it all comes at a cost that is a bit above the competitors on the market. Ultimately that is what the hurts the Keeper the most.