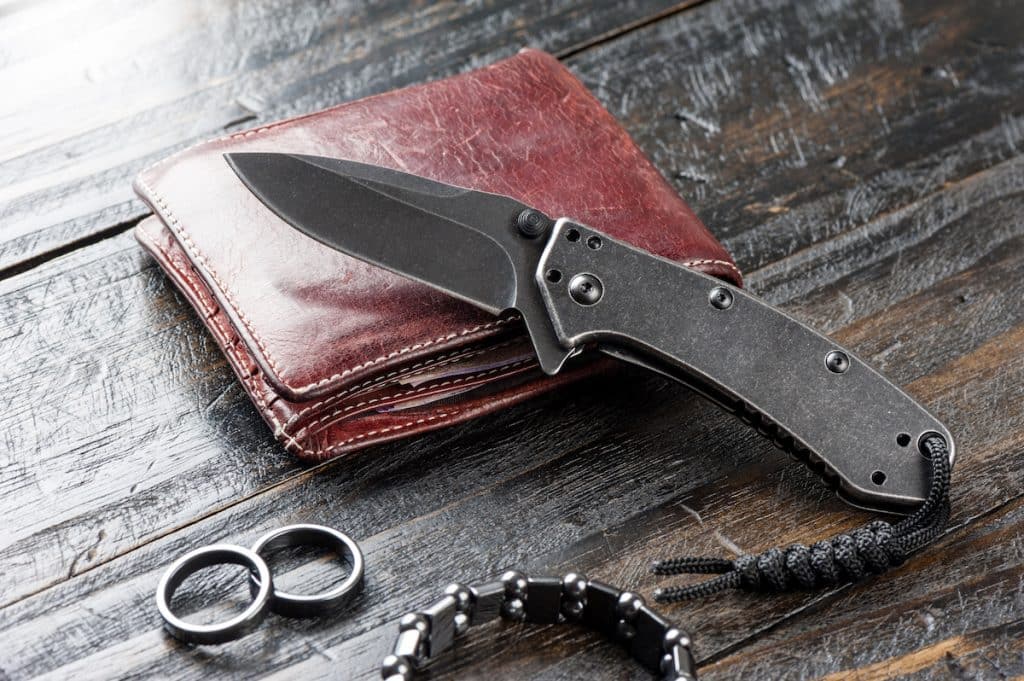 We tend to focus on firearms here at USA Carry, for obvious reasons. However, we have discussed the role of knives in the CCW world in the past, and it’s fair to say that knives and CCW have a very complicated relationship. So I thought we ought to sit down and take a look at the role that knives play in CCW, for good or ill.

There’s little debate that knives are an essential part of your EDC kit. However, we should note that an EDC knife is primarily a tool, not a weapon. While knives are capable of some impressive things in a self-defense roll—check out these videos and you’ll see what I mean—it’s a skill set that requires aggressive and consistent training. And just as concealed carry law is relatively complicated and varies from state to state, knife laws are equally variable. You’ll need to make sure you’re within the law of the land for your jurisdiction, whatever that might be.

So let’s say that you’re training hard and that you’re carrying a knife within the law—when does your knife become a viable self-defense tool? Well, that depends on circumstances and what you’ve trained for. For me, my CCW is my primary self-defense tool, given that I’m faced with potentially lethal force. I would only draw a knife if my sidearm suffered some catastrophic failure and I was forced to transition, or if I were in a situation where I couldn’t draw my sidearm. I’m envisioning the almost cliché assault in an elevator/phone booth stairwell. You may be pinned to a wall/the floor or otherwise unable to draw your handgun—your knife and your hand to hand skills may just become your primary means of response.

Now, let’s flip that and look from the point of view of the criminal. Knives are a heck of a lot easier to get than guns, and the FBI reports that knife crime, while down, is still a potential threat. A knife is a deadly weapon in extremely close quarters. Muggers know this—and they’re going to do their best to take you by surprise. Likewise, an assailant more intent on doing you harm than stealing your wallet is a deadly threat with a blade of nearly any size.

So what’s the solution? Well, it’s a combination of situational awareness and dealing with threats before they develop. Avoid shady parts of town or areas muggers like to frequent while searching for targets. If someone has a grudge against you, you’ll need to take steps to deal with that before a problem develops.

There’s one final thing to address about knives and CCW, and it’s especially ugly. Mass knife attacks have become an increasingly common mode of terrorism. I wrote about this a few months ago, and there have been more incidents since then. We’ve talked about things form a CCW perspective—but what if you’re only armed with a knife? Well, I hold the standard view that knife-on-knife engagements are to be avoided at all cost. However, if the lives of others are at stake, you may make a very different judgment call. I can’t tell you what the right answer is, but I hope I’ve helped get you on the right path.

Let me know your thoughts in the comments section, and until then stay safe out there.

I keep a nasty looking pocket clip knife in my pocket, and a small knife in my watch pocket as part of my defense kit. Not that I want to EVER be in a knife fight (because you WILL receive cuts), but it represents another chance at defending myself should something happen to my firearm. I do fighting exercises several times a week to build speed, stamina and proficiency (my brother is a 5th degree black belt in karate, and also teaches self defence and knife fighting to law enforcement).