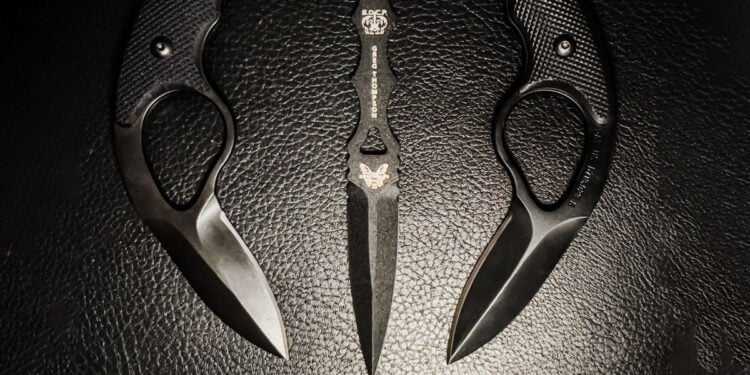 This article owes a lot to Marc “Animal” MacYoung, a prolific writer and thinker about self-defense issues whose work you should really check out. One of his areas of expertise is knife fighting and the use of knives in self-defense. MacYoung presents three basic considerations for knife use in a self-defense context in his must-read article on the subject, and I’m unable to improve on them:

Any discussion of knives for self-defense has to keep these three points in mind. Legally and morally, you’re introducing a lethal weapon into the conflict—and that may have long-lasting repercussions for everyone involved. You may not intend to do lethal damage, but that’s the trick: knives can wound or kill with a touch, and in the chaos of an assault that can happen inadvertently. Another caveat: this article is about the general use of knives in self-defense, not engaging in a knife fight with another armed person. With all that having been said, let’s talk about choosing a knife as a self-defense tool.

The first step, as always, is to get familiar with your local laws on the subject. Each state—and many municipalities—has its own laws about knives: what you can carry, where you can carry, when/how you may use them, and what constitutes the legal use of lethal force (yes, that again) for self-defense. It might be a good idea to book a consultation with an attorney. Yes, that’s expensive, but it’s best to get legal advice from a professional who is bound to act on your behalf.

The second step is to consider your self-defense plan as a whole. Personal protection does not start and end with weapons; there’s a lot that goes into conflict-avoidance and safety planning other than planning for use of force. Make sure you’ve got those bases covered.

Nor should you neglect other possible self-defense tools. Even if you have a knife, you may not be able to deploy it in time, or you may need a less-lethal tool instead. Make sure to keep those options open.

Now, let’s talk about the knife you’ll be carrying. Unless you live in a rural area, you’ll probably legally and logistically be better of with a lock-bladed folding knife, one designed as an all-purpose tool. Because that’s what it’ll spend most of its time doing. Opening boxes, cutting strings and rope, and other mundane tasks are its purview. If legal in your state, there are knives made specifically for knife fighting such as the Colonel Blade or the Clinch Pick.

Finally, you’ll need some training. Probably quite a bit of training. There are numerous systems for the use of knives in self-defense out there. One that comes to mind but I have not taken is the Edged Weapons Overview course by Shivworks. I would suggest selecting a system or school that teaches both armed and unarmed techniques—you’ll likely need both if something does go wrong. I’m a big advocate of the notion that a short-range weapon like a knife exists to give you the time and space to run, so please give that some thought.

These are just some thoughts to get you started. Please reach out to me in the comments section or via email and let me know if you have any further questions or ideas. I love hearing from you.