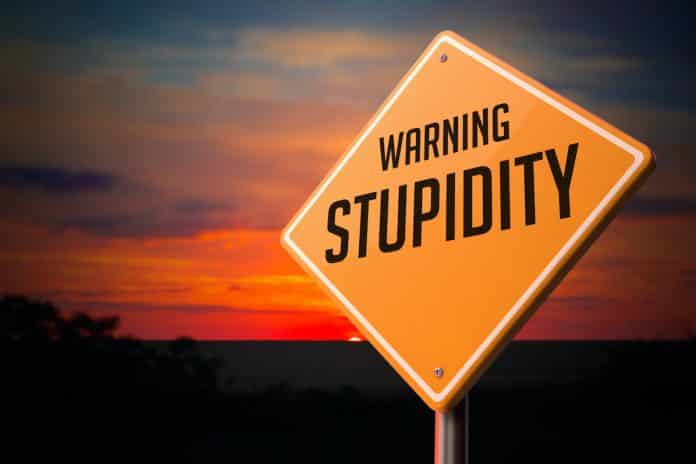 To borrow a line from Forest Gump, “Stupid is as stupid does”.

A 29-year-old man in the checkout lane a local market decided it would be a good idea to unholster his 9mm Glock to show it off to a friend. The legal ramifications of pulling a gun in a public space like that are bad enough but this guy couldn’t get it back into his appendix holster without shooting himself in the groin. (Queue mass moaning by all the guys out there) The shot exited through his thigh and reportedly just missed his femoral artery.

He was taken to a local hospital but then later flown to a Portland hospital for further treatment. The total extent of his injury is not known but no doubt it’s serious.

I sincerely hope he’s alright of course but this could have easily been avoided by simply leaving the gun in his holster.

The legal implications are serious as well. First of all, he didn’t have a concealed weapons license so he shouldn’t have been carrying at all. Police said “…his act was found to be reckless since it placed several people in danger” so criminal charges are very possible.

Frankly what part of concealed carry was hard for this guy to understand? The only time anyone in public should know you have a gun is when you are justified in using it. (Unless of course, you are open carrying which I strongly oppose but that’s for another time) If you just have to show it to someone, do that in private away from anyone that could possibly misunderstand what you are doing.

The biggest issue is of course the apparent lack of training. Either he or something near his waistband operated that trigger and allowing that to happen is not an accident, it is pure negligence. “Yeah well he’ll never to that again”, one might say. Maybe but he also may never be allowed to depending on what, if any, charges he could face that might prevent him from even owning a gun in the future much less getting a carry permit.

My guess is that he is a relatively new gun owner and was all excited about it and carrying but at that moment he was not a mature enough adult to use good judgment regarding concealed carry of a weapon.

Don’t be that guy. We have enough issues to deal with as concealed carriers without giving the anti-gun crowd something to point to. Get proper training, be smart about handling your gun, and be safe.

And people keep telling new gun owners to ALWAYS carry with one in the chamber, yeah okay buddy. When I first got into firearms I studied the four safety rules of firearms handling without any training(something I should get but then again I’m doing pretty fine for now). Also don’t blame all new gun owners because someone either around them or on a screen told them that they MUST or NEED to carry that way because everybody and their dog carries that way. Hopefully a new gun owner will read my post before this website deletes the next batch of phenomenally well posted arguments on the comment section.

Please don’t delete my post because you know I’m speaking the truth.