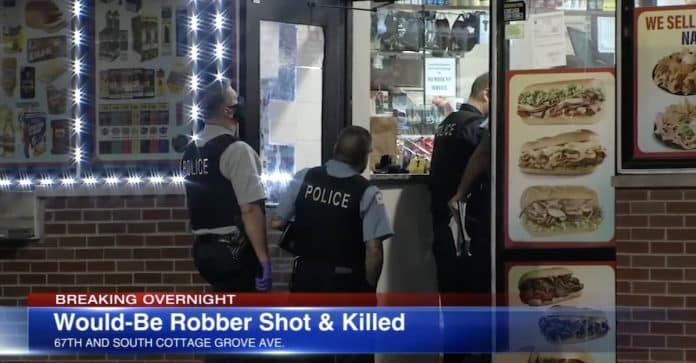 A little before 10:00 PM on Chicago’s South Side, a man attempted to rob a gas station using a shotgun. He was unsuccessful as he was shot in the back and the face by another individual who left the store unidentified. The shooter has yet to be found by police. The armed robber, a 55-year-old man, later died.

A question that sometimes comes up in classes:

“Is it ever ok to shoot someone in the back?”

I’m never sure what thinking prompts that kind of question but like all other legal questions, the answer is always, “It depends”.

It depends on the totality of the circumstances in each case. Technically the answer is yes, it is sometimes ok to shoot someone in the back provided all of the self-defense conditions are in place.

If the shooter, in this case, was using deadly force to defend someone in the store from the armed robber then that could be a justified use of deadly force. The law does allow us to use force to defend others. Leaving the scene before police arrive however doesn’t lead anyone to believe that was your motive. That looks more like the consciousness of guilt than self-defense.

What if you caught up with an armed home invader on his way to your child’s bedroom? In that case you’d be stopping a deadly force attack against your child. And no, you don’t have to call out a warning though if you believe you might have a chance to stop the attacker safely that way it could be worth a try.

No, this doesn’t look like self-defense but this is the South Side. Maybe the “Good Samaritan” needed to flee and protect his identity for his own safety. Perhaps we’ll find out.