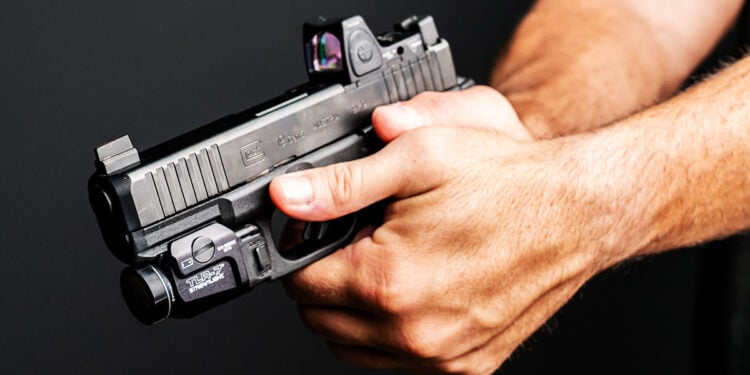 The four rules of firearms safety often get designated as tasks to remember when handling your gun at the range so that the safety officer does not kick you out. The reality is that the four rules should be deeply ingrained life rules for all who spend any amount of time using guns. The four rules are for fighting just as much as they are for keeping people safe when on the range or at home during administrative handling.

The second of the four rules essentially declares:

“Never point the muzzle at something you are not willing to destroy.”

In a sense, this comes off as the most obvious of the four rules. Even people who are not familiar with firearms generally understand that the business end of the gun is where the hurt comes from. However, in practice, there is a lot to rule two, and we witness the violation of this life safety rule often, even among those who should know better.

I have found that the true internalization of rule two is dependent on experience. Those who handle guns often begin to internalize this principle and apply it naturally. Experienced hunters in the field, for example, often become keenly aware of their muzzle direction at all times and keep the gun pointed in the safest direction. Experienced soldiers also do this. New, inexperienced, hunters are often a hazard and need to focus on consciously securing their muzzle direction. Similarly, many police officers who lack experience often violate rule two

Experience, or lack of, is on display when looking at footage of police officers. I recall one startling video that showed an officer touch off a round that missed the head of a subdued suspect by inches. The suspect was already on the ground and in handcuffs with other officers restraining him when this negligent officer managed to violate rules two and three and cranked one off into the pavement right next to the head of the cuffed man. This is one of many such examples. These incidents point to a lack of training, but more pointedly, to the lack of commitment among some officers to take their gun handling and firearms skills seriously.

To build the appropriate muzzle awareness so that you can maintain safety even under chaotic circumstances you must internalize the principles of firearms safety. The overall essence of these life safety rules is encapsulated in rule one, which declares that, “all guns are always loaded.” This rule emphasizes the fact that guns must be treated in only one manner, as if it is loaded at all times, to ensure safety. After almost every negligent discharge the perpetrator will declare, “I thought it was unloaded.” Thus, the negligent discharge results from the fact that the handler treats guns differently based on the assumption that it is unloaded versus loaded. Build into your subconscious the principles that all guns are always loaded.

This should lead you to handle an unloaded gun in the same manner as loaded guns and as such muzzle awareness becomes part of the gun handling process under any circumstances. When at home and handling the gun administratively, build a consistent habit of never flagging other people, or yourself, with the muzzle of the gun, even if you are sure it is unloaded. Also, develop a muzzle awareness that leads you to avoid flagging directions that may prove dangerous. For example, if you handle firearms in your basement while family members are upstairs, pointing the gun skyward is usually not a safe direction. You should utilize a dedicated safe handling location in the home that has a secure backstop and the muzzle should be pointed towards that backstop when doing any sort of gun handling.

Applying rule two can become complicated in a chaotic situation in public, or anywhere innocent people are nearby. Under some circumstances, you may need to choose the “safest” direction rather than a truly “safe” direction to point the gun. As all the safety rules are intertwined with one another, rule three, which stipulates strict trigger discipline, becomes exceedingly important under such conditions. If in a situation where you must draw the gun to deal with a threat you may be surrounded by other innocent people. Where is the safest direction to orient the muzzle if not on the threat? Is it pointed towards the ground? Perhaps, unless you have small children under you and clutching to your leg. Perhaps directly up, while held at a temple index, is the safest option under certain, if limited, circumstances.

Another important real-world application of rule two relates to muzzling your own body parts. While it is relatively easy to avoid muzzling yourself when shooting at the range or handling the gun administratively, things get more complicated during real-world stress. What if you need to draw your gun and move within an indoor environment? What happens when you need to hold the gun in your dominant hand but open doors or work light switches with your support hand? I have seen people muzzle their own support hand when opening doors in force on force training. As soon as stress is added and distraction is introduced, muzzle awareness becomes more challenging.

A good way to enhance your muzzle awareness is to use a blue gun, which is an inert, plastic, training gun, in the home. Practice drawing the gun and then moving with it. Pay attention to where you orient the muzzle as you move. Practice moving around objects safely. Practice opening doors or working light switches safely. Practice picking up objects and moving safely. The more you simply work with a gun in your hand, or the training gun, the better you will get at practicing good muzzle awareness, and the more you will internalize the second rule of gun safety.