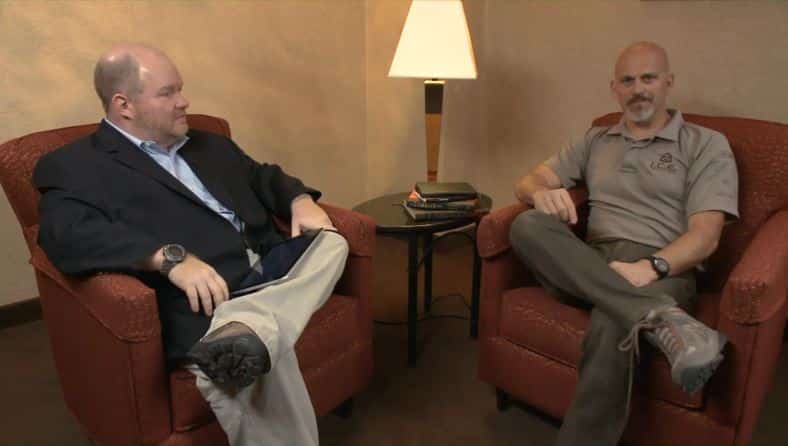 Once again, Personal Defense Network brings William Aprill to the screen, interviewed by Rob Pincus.  Aprill is one of the foremost experts on violent criminal actors, having worked in law enforcement before pursuing a career in mental health care and research.  Violent criminal actors (henceforth VCAs) are complex actors, with a wide variety of motivations, characteristics, and approaches. Aprill explores their nature from a self-defense perspective.

Fair warning: there’s a lot of information here. The DVD is broken up into chapters, and I recommend watching them one at a time with breaks in between. I also recommend having a pen and paper handy—you’re going to want to take copious notes. I filled five pages.

While Aprill approaches the subject through the lens of mental health, he makes it clear that the majority of mentally ill people are not violent. Rather, violence is a form of intra-species predation: a rarity in the animal kingdom but an integral part of human group interaction. However, like all human behaviors, there has to be a reason for it. Some of those reasons are material gain while others, more frightening by far, are just the enjoyment of violence.

So what creates VCAs? Aprill breaks it down into environmental factors and organic causes. The latter are the clinical sociopaths: those unable to feel empathy or who take joy in the suffering of others. However,  childhood environment has a lot to do with it. People socialized to violence become violent; those socialized to instability feel no obligation to their community.  The term used is violentization, and I find it bone-chilling.

The segment on the triggers of violence is the most enlightening. We live in a society that makes an assumption of sanity, i.e. we tend to believe that those around us will follow social norms. However, VCAs have a different idea of normal, and make a different set of assumptions—Aprill sums those up as “the violent get ahead.” Learning what sets them off is one of the DVD’s most valuable lessons.

However, the segments on training and mindset are the most interesting. Aprill pulls no punches: while de-escalation is a powerful tool, for many VCAs it simply won’t be an option.  There’s a great deal of discussion of OODA loops, so many viewers might find it beneficial to review the basics in advance.  Aprill confirms that most interactions with VCAs will put the target at a disadvantage—the criminal will have both a situational advantage (ambush) and a mindset advantage (being further ahead in the OODA loop). Dealing with that becomes the springboard for a discussion about mindset, training, and the ways in which to make those effective in a real encounter with a VCA.

Personally, I found Aprill’s willingness to call out some of the pervasive myths and lies around training refreshing. While situational awareness  is important, none of us is in “ready to fight” mode 24 hours a day—as he says, you can’t buy a latte in sul.  He also points out that in order for training to have value, it has to be cost something: in short, “training should hurt”. It’s easy to fall into the trap of training for what we enjoy—shooting, I suspect for most of us—but unarmed self defense, home security, and physical fitness are all equally important. Likewise, cultivating the right mindset, especially in terms of decided what level of violence you’re willing to commit to in order to keep yourself safe, is also a vital step.

In summary: this isn’t a video for beginners, nor is it a manual of tactical techniques. It’s two people, sitting on camera, and talking about the violent criminal actor, their development, their motives, and how to deal with them. It’s dense, rich, and challenging. If you’re really serious about your personal safety—and if you’re humble enough to deal with the honesty—I highly recommend this one.

The Virginia Shooter: What We Know, What We Don’t Know, and What it All May Mean