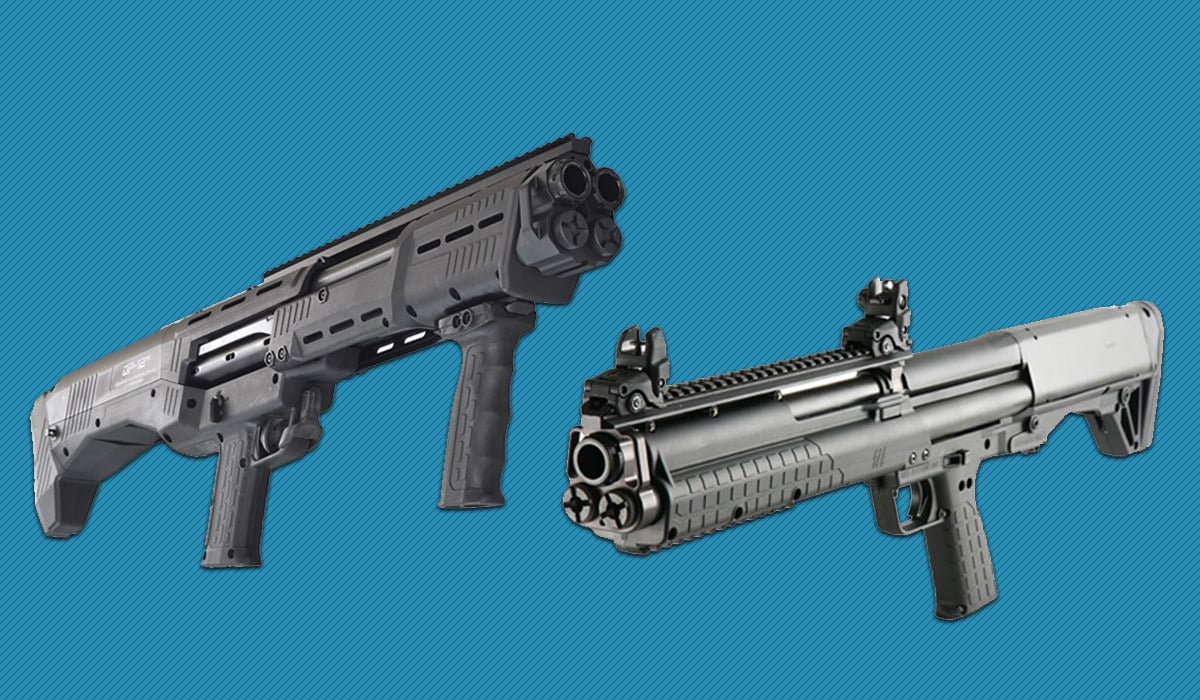 Two of the most attention grabbing shotguns of the last few years, Kel-Tec’s KSG and Standard Manufacturing’s DP-12 have certainly gotten their share of attention.  Recently, I got to handle and fire them both in the same range trip.  While I’d read reviews and seen quite a few videos of them in action, getting them up and running side by side delivered a great many revelations about both weapons, as well as the future of home defense/tactical shotguns.

First, both weapons by the numbers:

I’ll say this up front: both weapons felt well made and performed very well during our range trip. The multiple accessory rails offer many potential uses, and a bit of research reveals that plenty of after-market additions are available for each. In terms of quality, reliability, and performance, both the KSG and the DP-12 are rock solid platforms.  However, they handle quite differently and, to my mind, are intended for very different roles.

The KSG lives up to Kel-Tec’s usual approach: genuine innovation and out of the box thinking flawed by a couple of small-yet-important details. The KSG  handles remarkably well: the bullpup design makes it easy to maneuver –I imagine it would handle quite well in an CQB/interior setting. We were shooting with iron sights attached to the top rail, and even with that crude setup the weapon was accurate at indoor distances.

In terms of ergonomics and use, the KSG incorporates a couple of features I love. It feeds and ejects through the same port on the bottom of the weapon, and being able to toggle back and forth between magazines is an interesting feature. I like it, but I think it has some limitations: for tactical use I’d train to run one magazine dry and switch to the next as an instant reload, rather than trying to alternate loads. Having one mag filled with buckshot and the other with slugs is an interesting idea, but not one I’d want to implement under pressure.

The KSG is a quick, handy little weapon. By contrast, the DP-12 is a beast in every sense of the word. Large, heavy, solidly constructed, and promising to deliver a lot of firepower. The trigger fires both barrels in sequence with every pull, and the magazines each feed on barrel. In theory, this combines the best of both worlds: the quick reloads of a pump action with the instant follow-up shot of a double barrel. Like the KSG, it was accurate at indoor ranges and perfectly reliable during our testing. It also loads and feeds through the same port on the bottom, something I deeply appreciated while dropping two spent shells at a time.

The DP-12 offers a lot of features, however in trying to combine all of that into one platform something had to give. And that thing was size and weight:  this is a large, heavy bullpup that doesn’t always handle gracefully. While the KSG is nearly-ideally sized for indoor use, home defense, or CQB, the DP-12 would likely be a bit more difficult to use in those circumstances. This isn’t to say I can’t see a use for it. Anyone working outdoors, preferably from a vehicle, and needing a lot of firepower could make good use of this thing. Border patrol agents came to mind, as did ranchers and security types working outdoors. If I were still doing executive protection work, I could see keeping one of these in the trunk of the vehicle just in case. It could be the tipping point in an unexpected encounter.

In short: both are good at what they’re designed to do. Both are fun to shoot and really, really cool to handle. While I think the MSRP is still a bit high, I expect it will come down with time.

And that’s a good thing. The KSG and DP-12 and their innovative designs herald the future of tactical shotguns. Moving away from sporting designs like the 870 and 590, the purpose built designs open up a world of options for both home defense and field operations.

If you own one or have experience with them, let me know. I’d love to hear your experiences compare to mine.

How To Talk To Police After A Defensive Gun Use