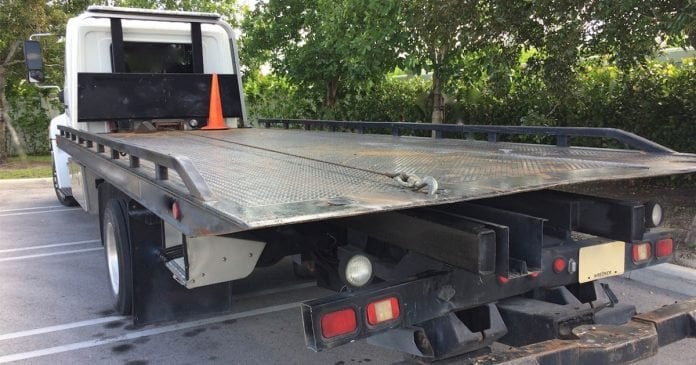 A 22-year-old Chicago man thought it was a good idea to steal a flatbed tow truck from a local towing company. I’m going to infer that the truck had a GPS locating device on board because the tow company’s owner provided the police with the truck’s location.

While the police were en route, the young man who stole the truck called 911 to report that he had stolen the truck and that the truck owner had pulled a gun on him. The police found the suspect in the driver’s seat and arrested him.

Oddly, there was no further mention of the owner pulling a gun on the suspect. I find this unusual, primarily because, during a court hearing, the judge released the suspect on home monitoring because “he did not use a weapon during this matter. He called the police, apparently, upon himself.”

This tells me that the suspect was not a deadly force threat against the truck’s owner when the owner pulled a gun on him. This means that the owner used deadly force to help him recover simple property and not defend against a deadly threat.

The use or threat of deadly force is not justified to protect or recover property. While the judge may have thought it odd that the suspect called 911 “upon himself,” what, in my opinion, he did was call to report a crime against himself in the form of aggravated assault with a deadly weapon.

In other words, you can’t legally point a gun at a car thief just because he is still sitting in your car. I’m surprised the tow truck owner is not facing possible charges for his actions. Perhaps that part was left out of the report for some reason, but please don’t assume from this story that doing what the tow truck owner did is a legally sound action. Report the stolen vehicle location, be a good witness, and let the police confront the suspect.