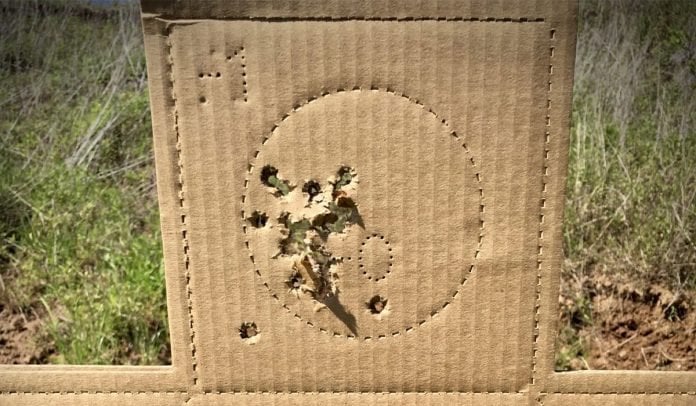 It is good to have baseline drills or minimum standard drills. These are go/no go drills. They give us a clear line that we must cross before allowing ourselves to carry a gun. One of those measuring sticks is the 5^5. It is Claude Werner’s adaptation of a drill from Gila Hayes that she called the 5×5 (not to be confused with the Bill Wilson 5×5 or the IDPA classifier). In Claude’s version, he has added repetitions to ensure that we don’t get a lucky run and meet the standard. In Claude’s version, we have to shoot it five times, clean, in a row. This type of repetitive performance is what makes what is seemingly an easy standard, maybe not quite so easy.

The 5^5 calls for a 5” circle target with a small dot in the center of it. Claude recommends using a CD or DVD to draw the circle, but CD’s are so 15 years ago, I had trouble finding one. Lucky Gunner has a printable target specifically for the 5^5 that you can print here. You can also use a B-8 and just keep it in the 9 ring or better, which is 5.5”, or just make and print a 5” circle in Word. Being the rebel that I am, I didn’t do any of those. I just shot the drill on the -0 in the IDPA headbox, which is 4” in diameter. It was an easy, and quick solution, but is actually about a 35% smaller target in terms of an available target area. Challenge accepted.

Each string is five rounds, shot from five yards, at what is supposed to be a 5” circle. The five strings of fire are started from the ready position. For a hard mode version, you could start concealed and run from the holster. I opted for the ready position since I was feeling out a new handgun, and shooting on a smaller target anyway. With a full-size gun, I might go for the hard mode.

I came to regret my decision to shoot the drill on a 4” target instead of a 5” target because I got close to a clean five strings, but missed one on string four. Hitting a 5” or even 4” circle at five yards is easy work for me, so this just highlights the added difficulty of pulling off five consecutive clean runs. Although, I killed the par time, so maybe just a little slower next time.

So, what does failing to pass the standard mean? It means carrying the gun doesn’t get carried until it can be passed. I have my own personal standards for carrying a gun. And guess what? I can’t meet those either with the P380. Probably not the gun’s fault, but it doesn’t really matter. My skill level and the attributes of the handgun have to mesh well enough to be good enough to be carried. It doesn’t mean the gun gets tossed out or traded away. It just means I work harder. Then try again after learning the gun.

As a base standard, the 5^5 is particularly well suited. It is an easy enough drill that it can be shot on nearly any range. The time limits are long enough that they do not require a dedicated shot timer. A friend with a stopwatch would do just as well. There are plenty of things to make a 5” circle with. The logistical hurdles are so low. They are almost not even there. As I have proven myself, it isn’t a gimme standard either. It requires a bit of focus and consistent application of skill to pass.

If you get a chance to get on the range, give the 5^5 a try. Try it with the gun you carry and see how it turns out. Try it with different guns too. It can really highlight how much easier it is to shoot one gun over another. Let us know how you do in the comments.