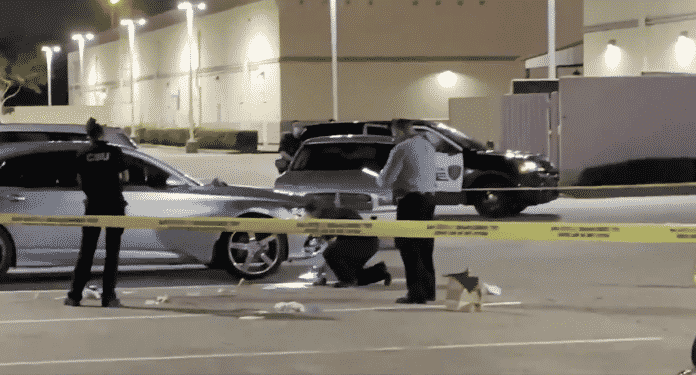 An evening out at a Texas restaurant turned deadly for a dad, stepmom, and son recently.

A husband and wife were enjoying a night out at a south Houston restaurant when a man decided to interrupt them while they were dancing. The man allegedly groped the wife who turned and slapped him. The couple then decided that it was time to leave.

The man apparently wouldn’t quit and followed the couple into the parking lot where he grabbed the wife and punched the husband. Video later showed that the husband appeared unconscious after the attack.

The couple’s 21-year-old son saw what was happening when he was leaving the restaurant and opened fire on the attacker. The man was taken to a hospital but did not survive. Witnesses and video clearly showed that the son was protecting his parents. The father said that he had been shot during a robbery a few years back and he believed that’s why his son acted quickly.

The father and son were questioned at the scene by police but were allowed to leave. The wife was shot in the leg during the ordeal but is expected to be fine.

From what I’ve seen on video and from what everybody is telling me, yes, he’s clearly taking action to protect his dad and mom. VIA NEWSWEEK

No charges were filed but the case will be referred to a grand jury.

We don’t get to choose the time and place of an attack against us. We will never know the motivation for this one but it does illustrate that there are unstable people out there.

This couple initially did the right thing by trying to remove themselves from the area and away from what they might have thought was just a creepy guy. Unfortunately, he was able to get close enough to them again to escalate his attack. The suspect was said to be in his thirty’s so he likely had a fighting advantage over the father.

For the son to be justified in using deadly force to protect his parents, he needs to be able to show that they were facing a deadly force threat. With his father unconscious on the ground and the attack continuing against his stepmother that would seem to be a reasonable conclusion.

The fact that they weren’t arrested and were allowed to leave the scene would seem to indicate that the local authorities agreed with the son’s actions.

This case also illustrates why so many firearms trainers encourage their students to carry everywhere they legally can. Without his gun, the son would have little choice but to go hands-on with the attacker that just knocked out his father.

The son should probably get some more training though. Shooting your stepmom while trying to save her may take a very long time to live down.

Also, if the restaurant served alcohol, was it legal for the son to be carrying his gun?

I don’t agree with such laws and since I do not drink, I ignore them.

But if the grand jury wants to be snotty about it …

Guilty of Attempted murder on the Stepmom, and 2nd degree murder on the suspect he killed….. you don’t shoot someone because they are hitting on your stepmom….

No, you shoot someone who’s just knocked your father out and shows no intention of deescalating. You don’t appreciate either how badly the dad could have been hurt with that punch, or the fact that, despite the decision the couple made to flee rather than fight, the aggressor chose to pursue them and fight — and anytime someone decides to fight, the stakes are potentially for keeps, even if only fists are used. The son’s only “crime” was poor marksmanship so far as his stepmother is concerned.

Your moral judgment is suspect. In your mind, exactly what circumstances would justify the use of deadly force?

Ryan, you don’t know the law. But the people on this website do, and will pay no attention to you. You are embarrassing yourself.

It’s illegal to carry inside where they serve alcohol. He seemed to have been leaving and may have had it in his car. It’s reasonable that due to the violent nature of the attack on the Father and the sexual assault of the stepmom, that his response was justified.

Not so… Restaurant carry is LEGAL, so long as you’re not ‘intoxicated’. The 51% rule applies in Texas. Restaurants get less than 51% of their revenue from alcohol sales. Seems the son was carrying LEGALLY and responsibly under the law!

“fear death or serious bodily harm”. People forget that 2nd part. And being knocked unconscious has been found in court to be “serious bodily harm”. Texas may even be one of the states that allows deadly force to prevent a felony, etc – not all states have the same threshold.

One punch can and does kill people! As the bad guy had just punched his Dad and knocked him out (he could be dead) and was continuing to attack his step-mother, the son was absolutely justified in using deadly force to stop this attack!

Great job I would do the same thing great job son!!!