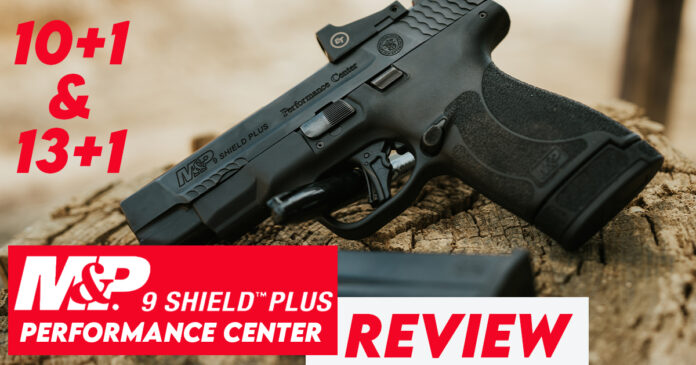 For those who like to read, below is my script/notes converted into something readable.

I’m sure most of you are familiar with the S&W M&P Shield line of pistols. It started with the original M&P Shield, a micro-compact 9 that holds 7+1. Coming in at an MSRP of $385 along with Smith & Wesson’s known reliability, it quickly became a hugely popular concealed carry pistol.

Then there’s the M&P Shield M2.0 which incorporated some of the features of the M2.0 line of pistols into the micro-compact Shield. There’s also the Shield EZ line which is easier to rack.

But it was hard to recommend these once the micro-compacts with more capacity started coming out—the Sig 365 and the Hellcat, to name a few.

Then on March 15, 2021, Smith and Wesson introduced the M&P Shield Plus, which is almost the same size as the original Shield but holds 10+1. That’s three more rounds in what is essentially the same footprint as the original. You can see both of them side by side here. Since I have the Performance Center, the slide and barrel are longer than the original, but you can still get a good comparison from the grip and width.

When Smith and Wesson said they were sending me one to review, I was looking forward to getting my hands on it. I’ve shot and reviewed or am working on reviewing all the other micro-compact 9’s.

So let’s go over the features of what you get if you decide to go with the Performance Center version. There are a few options you can choose from when you are on the Smith and Wesson website.

First off, you can choose whether it is optic ready. Now while looking at their website, if you select ‘Yes’ under Optics Ready, it adds the optic cut and the Crimson Trace CTS-1550 red dot sight, which jumps the price up to $266. I haven’t seen where you can buy it with just the optics cut and not the actual red dot, but I could be wrong.

The Crimson Trace red dot has the Shield standard footprint, as in Shield Sights, not the S&W Shield. So there’s a few other optics that will mount directly to the slide, like the Shield RMS, RMSc, Sig Romeo Zero, Delta Point Pro, to name a field. You can mount a Holosun 407K and 507K, but you’ll need to modify the indexing lugs, and we’re not going into all of that today.

Now, if you select No under Optics Ready, then you get the option to select manual thumb safety or not. If you selected Yes for optics ready, it defaults to no thumb safety. Then you can select it with a ported barrel & slide or none. Or you can get a kit that comes with a knife and a flashlight.

So those are your options. Smith and Wesson sent me the optics ready with the Crimson Trace optic and no ported barrel & slide.

It doesn’t have forward serrations, but it does have some fish scale-like serrations toward the bottom of the slide, which I believe they added to the Shield M2.0. They seem to help get a better grip if you are doing a press check from the front of the barrel.

It does have the wavy serrations toward the rear of the slide, just like all of the Shields have.  There’s a ledge toward the front that works as a good index point for my thumb when I’m shooting it.

The only thing reversible on the Shield Plus is the magazine release. It is kind of rounded but has some pretty aggressive texturing on it, so my thumb just kind of sticks to it. Going back and forth between the original Shield and the Shield Plus, the texturing just plants your thumb, whereas the original feels like it has a better chance of slipping. Small change, but I like it.

The grip texture is a bit more aggressive than the original Shield. It feels like it is the same texture as the magazine release. It has more of a microdot texture than the splotchy texture on the original Shield. I think it feels way better in my hand, and I had no issue with it moving around when I was shooting. It was pretty hot, and I was, of course, drenched in sweat, but the texture allowed me to get a good solid grip on the gun.

The part of the frame that doesn’t have the texture on it seems smoother than the original. I would have liked just a little bit of that same texture on the slide where my thumb lands, but you could always add that after if you wanted to.

It does not have a rail on it, so you can’t mount a light to it unless Crimson Trace or someone makes something that attaches to the trigger guard. I’m not worried about putting a light on these micro-compacts, so that doesn’t bother me. It would be nice to have so I could put my Mantis X10 on it, but you can just you a mag plate adapter for that.

The trigger is completely different than the previous shield models. On the Shield Plus, you’ve got a flat-faced trigger versus the hinged trigger that was on the previous models. It has a wide trigger safety which doesn’t bother me at all. The trigger itself is VERY nice. I think this might be the nicest trigger I’ve gotten on a stock gun recently. It has a clear wall, short break, short reset. It is just a really nice trigger, in my opinion. The Performance Center model does come with a PC tuned action, which is supposed to “offer shooters a cleaner, audible, tactile trigger reset that allows for rapid follow-up shots on target.”

Using my Lyman trigger gauge, I got a 5.5 lb trigger pull average over ten pulls.

With the 10-round mag, you get a micro-compact grip. I’m able to get a pretty good grip on it. Most of my pinky is able to get around the grip, but I will still opt for a pinky extension to give me a full grip without compromising concealability. I would have liked to see a pinky extension throw in with the pistol, but you can purchase these reasonably cheap online.

With the 13-round mag, you get a compact grip which obviously I can get a full grip on. Unless you’re an ogre, I’m sure most of you can too.

I definitely like having the option to switch between both grip sizes. Lately, I’ve been carrying my Glock 48, which I’ve had no problems carrying after switching to a couple of new holsters. I’ll talk more about that in another video. So I would probably be carrying this with the 13-round mag most of the time since I don’t have a problem concealing a pistol that size. But having the option to go shorter is pretty cool, and I can see how that might be helpful with certain clothing or situations where you may have to have a bit deeper concealment.

I also like the fact that if you DO go down to the smaller mag, you’re still getting that 4-inch barrel. A while back, I used to carry my Glock 43 with a Glock 48 slide on it just to have a longer barrel, and the longer barrel also helped with concealment. So, as far as I know, this and the Sig 365 are the only micro compacts 9s with the higher capacity that you can get a longer 4 inch ish barrel. Just something to think about if you are looking into getting a Shield Plus.

With all of that out of the way, I’m sure you’re wondering how it shot. Well, I’d have to say this was probably the quickest shooting for a review I’ve done in a while. I fired around 500 rounds through it in a few hours and was out before it got TOO TOO hot.

Most of the ammo I shot through it was CCI Blazer Brass. I also shot some Red Army steel case ammo and an assortment of hollow points.

I was in and out of the range because:

1. I had ZERO issues with this gun. And,
2. I remembered to bring my UpLuLa Mag Loader.

So from the first mag to the last, there were zero malfunctions. But I came in expecting that from Smith & Wesson. I’ve never had any issues with any Smith and Wesson firearms.

It was actually pretty fun to shoot. I feel like since it has the longer 4-inch barrel, it isn’t as snappy as some of the other micro-compact 9’s with shorter barrels. I felt like I was able to control the recoil well and was getting back on target quickly.

And as I mentioned earlier, the trigger felt great, so no issues there at all.

This was my first time using the Crimson Trace red dot, and I had no issues with it. It was already zeroed….enough. The window is pretty close to the same size as the Shield RMSc, which is what I’m used to having one on my Glock 48 and Hellcats.

Alright, so time to wrap this thing up.

The main thing I like about it is the longer barrel. This is a huge plus to me. And being able to switch from a longer and shorter grip out of the box is great.

Would I carry it? Yes, for sure. I definitely wouldn’t have any issues with carrying this as my daily driver. You’re getting a great little gun that holds 11 or 14 rounds depending on the mag. You’re getting the reliability that Smith and Wesson are known for.