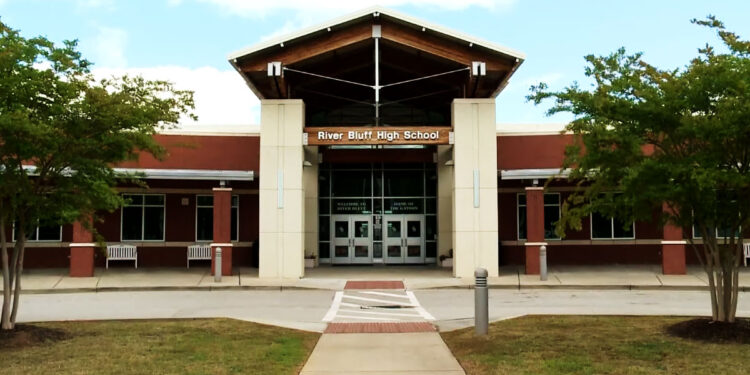 A teacher in River Bluff, S.C., has been arrested on a weapons charge when her handgun was discovered in her vehicle on school property. While a number of states allow teachers to carry their guns in schools in a concealed fashion, not all do…

On December 6, police searched the vehicle of Susan Horton, a teacher at River Bluff High School in Lexington, S.C., discovering an unsecured and loaded handgun in a purse on the floorboard of the car.

According to the Lexington Ledger, Horton was questioned and disclosed to police that she had a concealed weapons permit.

Horton was known to boast to her students that she always kept a gun in her car, and it was her students who provided the tip to police that a gun was likely located in Horton’s car. After obtaining a warrant for searching the vehicle, Horton was arrested on a charge of Carrying A Weapon On School Property and booked into the Lexington County jail.

She Faces Up To Five Years If Convicted

The charge is serious.

Carrying A Weapon On School Property is a felony, with a maximum sentence of five years in prison as well as a fine of up to $1,000. A conviction would end her career as an educator if the arrest hasn’t already.

South Carolina law allows a person to have a firearm on school premises, so long as the owner has a valid concealed weapons permit, the firearm is inside a closed or secured compartment, and the vehicle is locked. SC Section 13-23-430 defines such compartments to include the glove box, center console, or in a fastened container inside the trunk.

There are a number of lessons here.

Be mindful of who knows that you even have a gun, let alone carry one. The fewer, the better because there are people who will report someone even if no one is actually being harmed. Co-workers, subordinates, people you might have thought were your friends.

Carrying in a non-permissive environment can have real consequences. Weigh the pros and cons heavily. Carrying against policy should be done discreetly, and true concealment, rather than mere cover, must be preserved at all costs.

Leaving guns in cars can also have consequences. Guns are frequently stolen from vehicles and are the prime target of firearm theft. Keeping a gun in your car regularly, especially unsecured, risks the gun being stolen and discovered by employers or passersby who may alert the police or a business owner.

Unfortunately, we have reached a point in our society that those who lawfully carry a means of their own protection – and a means to protect others – should fear being turned in, especially by someone just looking to get someone else in trouble. However we may protest reality, it also behooves us to be able to exist within its confines.