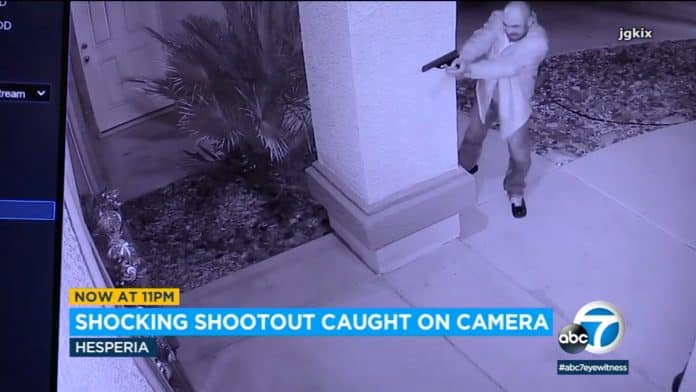 A homeowner and his family in Hesperia, CA were surprised by a man kicking at their front door demanding to be let in. The man got his wife and child into the closet and then went to get his gun. When he got to the door he could see the man outside pointing his gun and that’s when the two of them started shooting at one another through the door.

The shootout didn’t last long and the suspect quickly fled the scene. No one was injured. The whole incident was captured by a security camera near the door. The suspect’s gun appeared to jam at least once and it didn’t appear that he got off many shots at the homeowner.

The police soon arrested the suspect in the neighborhood. Turns out he was a neighbor to the victim but they did not know each other. He was a felon and was charged with multiple felonies including attempted murder. The report said that the suspect also fired a shot at another home as he fled.

Normally shooting through a door is a major no-no. Homeowners have gone to prison over that move. Besides grossly violating Universal Safety Rule No. 4, know your target and what’s beyond it, shooting through a door usually means that you don’t know who or what’s on the other side. It can also be argued that if the threat is still on the other side of the door are they really a deadly force threat at that point?

While it’s unclear from the security video, there apparently was a window of some type that allowed the victim to see the suspect pointing his gun at the homeowner. It could be argued that the homeowner could have simply moved away from the window and removed himself as a target for the suspect. Then again, once someone is shooting into your home that would seem to be a reasonable threat to the wife and child in the home. Bullets have been shown to pass right through multiple sheetrock walls with relative ease.

One thing is for sure and that is the homeowner’s ability to return fire ran the suspect off and ended the threat.