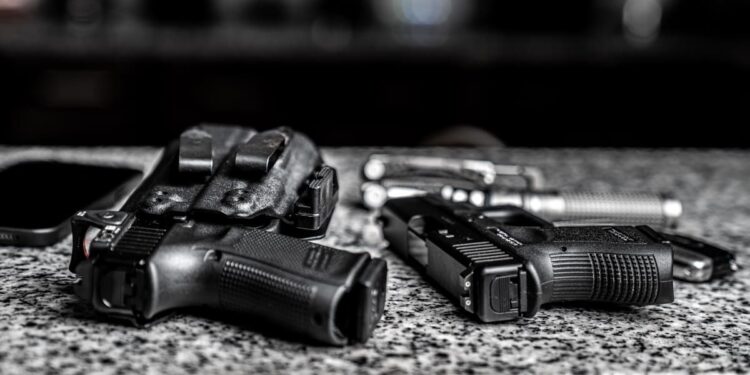 Carrying a second handgun is a practice that literally goes back centuries. In the days of flintlock pistols, which provided a single shot, multiple guns were often carried on body. In the old west, cap and ball revolvers, and even the later single-action revolvers that used contained cartridges, proved slow to reload; therefore, multiple guns were often carried by those expecting trouble. Even in 20th Century law enforcement, the majority of which witnessed the dominance of the double-action revolver, multiple guns were often carried by law enforcement as reloading a wheel gun simply proves too slow under fire. And, even now, although law enforcement carries modern, high capacity, auto loading pistols, those who know what they are doing still carry a BUG (backup gun). A small auto or revolver strapped to an ankle or tucked in a pocket proves standard affair among uniformed police officers.

The reasons for carrying a backup gun are many: A gun can fail mechanically. A gun can be destroyed when hit by a bullet in a fight. You can drop it and lose control of it, or an opponent might disarm you of it. You may also need to arm an ally that is not currently armed. While there is no denying the possible need for a backup gun, most armed citizens do not carry a second handgun on the person as do many law enforcement officials. The uniformed police officer, indeed, has a compelling reason to carry a second handgun, as they face the possibility of ambush or a disarm attempt far more often than do civilian concealed carriers. Looking at the nature of gunfights in the civilian world, the need for a BUG proves exceedingly rare. However, we have entered a new normal that may begin to dictate otherwise.

A New Consideration for Civilian BUG Use

With the changing nature of our world, I would submit that carrying a backup gun is becoming more worthy of consideration for the average concealed carrier. The increase in civil unrest and mob activity points to the growing possibility of needing a tool of self-defense beyond the single every-day carry pistol. The two most compelling reasons for this change in attitude towards carrying a BUG are the need to arm a family member or close friend, should you find yourself engulfed by a violent mob, or the possibility of losing control of your primary pistol should you be chased, grounded, and mobbed by a hostile crowd.

Such mob violence is not only limited to protests that have turned aggressive. In the past few years, there has been increasing mob violence, ranging from flash mobs of young people that spring up spontaneously to commit vandalism and attacks, to organized political agitation that takes control of cities. Should you find yourself in such a situation the need to carry an additional handgun on the person is more pressing than ever. So, if considering the addition of a BUG to your daily carry due to the threats of our contemporary times, how should you begin?

Realistic Pistol Options for BUG Use

If considering adding a BUG to on-body carry then one must start by assessing their own current carry gear, their dress, and their environment. In general, the BUG is usually a smaller gun than the primary carry pistol. While some folks opt to carry two full-size or compact handguns, most find this understandably challenging and typically opt for a significantly smaller backup weapon.

Typically, backup guns range in size from sub-compact double-stack autos (think Glock 26/27 size) down to small pocket autos chambered in 380acp or even smaller cartridges. The benefit of a gun like the Glock 26 or similar is that it can take the magazines from the full-size handguns of that particular family of weapons. This makes choosing the sub-compact size clone to a duty weapon a preferred lineup for many police officers. The downside, however, is that such guns are still rather large, and many find carrying a gun of this size in typical backup gun body locations difficult to do.

Many on-duty law enforcement officers opt to carry a small-frame revolver as a backup gun, and many civilians who carry BUGs opt for the same. The benefit of a small revolver is that this weapon type is very small, lite in weight, and impervious to the dusty or lint-filled conditions of ankle or pocket carry (common locations for a BUG). They can also be pressed into an adversary at contact distance without going out of battery, making them ideal for close-contact defensive use. The downside of the revolver is limited ammunition capacity and a slow reload.

If one desires to go as small and lite as possible, one of the modern polymer framed pistols chambered in 380acp might make a good choice. Such a gun can be added to a pocket or to an ankle holster with minimal problems, but I caution the user of such pistols to fully test these types of guns for reliability.

You may opt to carry a BUG on the waistband, perhaps opposite your primary gun so that the BUG is accessible to your off-hand. However, many find adding a second gun to the waistline difficult, so carrying the backup in a different body location is a common decision. The two most likely places for BUGs are pocket holsters or ankle holsters. Each of these carry locations offers certain advantages, but considerable downsides as well, and thorough consideration is required for each.

Pocket carry restricts you to rather small guns, most people will find only small pocket autos up to this task, perhaps a small revolver if your pants pockets are big enough. The advantage that pocket carry offers, however, is the ability to preemptively get a grip on the gun without anyone noticing. Bear in mind that a gun carried in the pocket is very difficult to access if you are moving, fighting, or on the ground wrestling with an opponent.

Ankle carry is very popular for backup gun use. I am not a fan of it for carrying a primary handgun, but I do favor it for BUG carry. The main downsides to ankle carry are the slow draw from a standing position and the difficulty in drawing the gun if you are moving. The advantages, however, tend to make it an appealing option for backup guns. A gun carried on the ankle facilitates decent access when on the ground, and also facilitates good access when sitting in a vehicle. It also places the second gun in a location that is generally not needed for anything else already, as waistband or pocket carry usually competes for real estate with other gear already being worn in those places. Generally, ankle carry will work best with smaller and lite weight guns.

What particular gun you choose as a BUG, and however you choose to carry it, is a personal decision. However, if you don’t currently carry a backup gun on your person I would suggest looking into adding this practice for at least those times when you need to be on the road and traveling through areas that may be prone to the threat of mob violence.