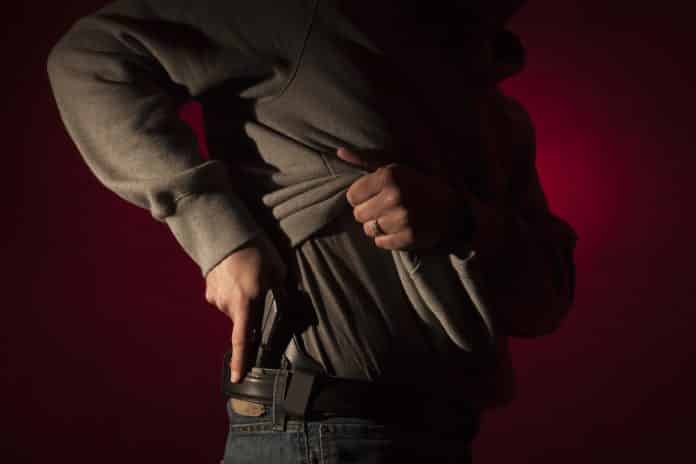 I get it, liberals. I get it. You find the idea of taking someone else’s life abhorrent. So do I. The difference, from what I’ve been able to glean, is that I’m prepared to defend myself from someone with bad intentions and you believe that the police should handle such matters.

You are especially animated when you discover that I can not only keep a loaded gun in my house for that purpose, but I can carry one concealed in public as well. You think that I will have so little self-control that the smallest perceived slight will cause me to go berserk with power and start shooting at the object of my ire and possibly to some innocent bystander’s detriment.

I think you believe this simply because you don’t trust yourself in such a situation. You don’t have to look far to find an example of a liberal so engulfed in rage and self-righteousness they do things like strip MAGA hats off young men in public. They refuse to sit calmly next to a person on a plane wearing a t-shirt they find “offensive.”

You cannot fathom how I have so much self-control that despite your outbursts, I am not compelled to draw my weapon and threaten you with it. You believe this because you yourself do not have the same self-discipline.

However, I do have that sort of discipline and so do my colleagues. There are tens of thousands of people carrying concealed each day, and yet, not one of your intolerant rants are threatened by us. You carry on endlessly demanding what you want, threatening people, standing in traffic, the list goes on. Yet, not one of us has drawn our weapon and shot one of you no matter how stupid you get or how offensive we find you. We roll our eyes and look at each other with “what the f@#k” quizzical expressions.

I will not, however, allow a criminal to threaten my life or someone’s life that I love, or even someone I don’t know out in public. Not even yours without defending myself or even you despite my personal feelings about you and your beliefs (or lack thereof).

I agree with you that we need to involve law enforcement. Unlike you, I respect and support the very people that you depend on to protect you from bad people with bad intentions. However, I am under no illusion that there is a police officer on every street corner to defend my life and property.

We have a saying in our community, “when seconds count, the police are minutes away.” That’s not being derogatory, that’s being aware of the reality of my situation. Almost every law enforcement bureau is understaffed. They are also under constant threat of litigation by you if they so much as twitch in a way you believe is unacceptable. They have been forced into wearing body-cams to prove your allegations are made up junk to perpetuate a narrative. Almost daily one of your colleagues is proven to be liars when the body cam footage is released and shows that nothing even close to what the officer was accused of happened. Yet, you loudly decry how unfair things are if they cannot respond to a home invasion in time to prevent the occupants from being killed.

I can’t wait for law enforcement to arrive, as the bad guy isn’t going to, either. If he plans to leave no witnesses behind, you and I will be long dead by the time the police arrive. I plan on having a fighting chance. I plan on being the live witness when the police show up. I plan to defend myself when the very worst of humankind decides it’s my life or his freedom to keep doing the bad stuff he’s already doing. You can sit defenseless, waiting on the inevitable to happen and hoping it won’t. But, hope is not a plan. In addition, it is not law enforcement’s responsibility to defend you; it is yours and yours alone. The fact that you choose to ignore that responsibility does not absolve you from it.

So, I obviously want you to gain some insight and some understanding of my plan. I believe strongly in our God-given right to defend ourselves. I want you to survive if you are ever attacked viciously. I am not some bloodthirsty inhuman dolt that just likes to play with guns. I have a purpose, I am trained, and I am in control of myself. I urge you to be, too.