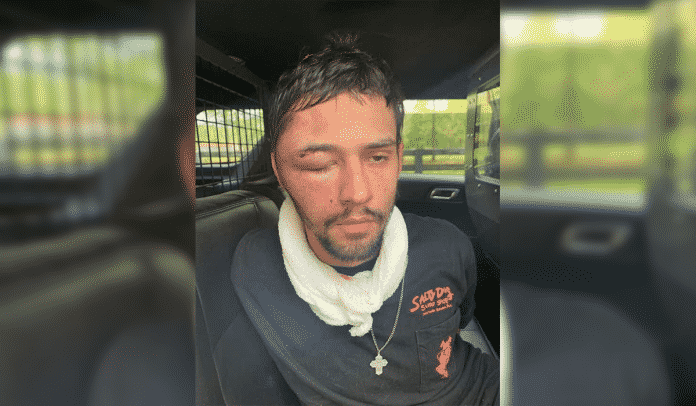 A Hebron, Ohio homeowner was ready for an attempted burglary about 2:00 in the afternoon on May 2, 2020. As the suspect was attempting to force his way into the home, the resident confronted him with a handgun. As the suspect then decided he had picked the wrong home and fled, the homeowner fired several warning shots and pursued him on his property.

“As Whitford fled the area on foot towards the riverbank the homeowner fired several warning shots. The homeowner searched for Whitford and located him on his property, bedded down in a wooded area,” VIA CINCINNATI.COM.

Several more warning shots were then fired close to the suspect before the homeowner went hands-on with him. The homeowner beat him badly enough for one eye to swell shut. The suspect was treated at a hospital before being taken into custody on second-degree burglary charges.

This is most definitely not a good example of how to defend your home. Oh, it started out great. The homeowner confronts the burglar as he is still trying to gain entrance, which causes him to flee the scene. Good job, threat ended, suspect is gone, now call the police.

But then the homeowner fires warning shots. NEVER, a good idea. In fact, that’s a great way to get charged with felony assault or even attempted murder. Warning shots only serve to show that you didn’t think that the threat was imminent. Shooting while the suspect is running from you only turns you into the aggressor in a brand new fight.

Not content with just running off the burglar, the homeowner then hunts him down, fires more shots in his direction, and then decides to beat him up enough to send him to a hospital. The homeowner is fortunate the suspect didn’t have a weapon or better fighting skills because he put himself at great risk by purposely getting in a fight with the suspect.

When police arrived at the scene, they found the homeowner “subduing” the suspect, so police witnessed at least part of the beating. There was no word on any charges against the homeowner, but a prosecutor, in my opinion, would have little trouble getting a conviction on multiple assault charges. The original burglary suspect could also have a case for a civil liability suit for injuries suffered during the homeowner’s attack.

The argument goes something like this. “The homeowner acted lawfully in defending himself against the original burglary attempt, but then his fear during the attack quickly changed to anger seeking revenge.” It can be a fine line between fear and anger, and we all need to be aware that it can happen during a deadly force attack. We must all constantly remind ourselves that when the threat stops, we stop.