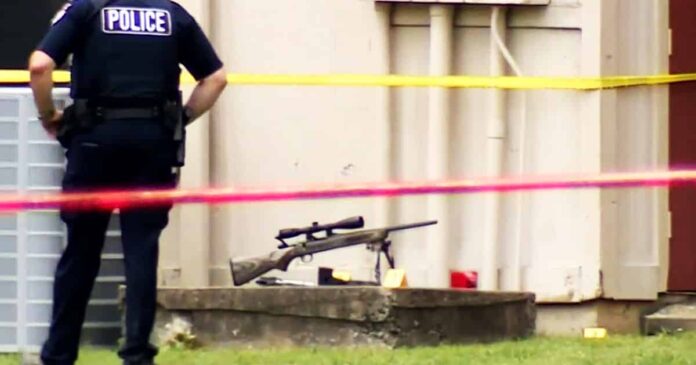 Back in May, a 26-year-old Army veteran suffering from PTSD started shooting up his Fort Smith, AR apartment complex while yelling at his neighbors to come outside shortly after 7:00 AM. An 87-year-old woman went outside to check on the man, and he chased her into her apartment and killed her.

The gunfire awakened an off-duty employee of the Department of Homeland Security. He grabbed a scoped rifle and stepped out on his balcony, and fired once at the gunman but missed because he was “shaking so badly.”

The DHS employee ducked back into his apartment as the gunman returned fire. He then moved to another location where he was able to take a second shot at the gunman, this time hitting him and ending the ordeal. The gunman died at the scene.

His mother said that he had been on prescription drugs for PTSD but stopped taking them and self-medicated with marijuana.  Police found drugs and paraphernalia in his apartment.

However, two and a half months later, the county attorney’s office cleared the [DHS employee] of any possible charges.

“Although there are unfortunately mental health aspects to this case, had [DHS employee] not acted in a swift and decisive manner, my office could just as easily be dealing with multiple homicides rather than the homicide of [the 87-year-old woman] and the justified shooting of [the gunman].”

Even though this would seem like a very clear-cut case of self-defense against a deadly force attack, it still took over two months for our hero to be found justified in his actions. Be prepared for your case to take some time to work its way through the system. This means that you may need to pay your attorney for longer than you’d like.

Also, notice that our guy missed his first shot with a scoped rifle – apparently even when the gunman didn’t know he was being targeted. Don’t underestimate the possible effects that stress can have on your skills during a life and death scenario.

Unfortunate as it may be, it is real life and PTSD is NOT always a controlled ailment. The elimination of the threat being justified may be additionally tragic but, had to be done.

I agree that PTSD is no joke and shouldn’t be taken lightly….I do however have to wonder if the outcome of this (no charges) would have differed if the “hero” of the story didn’t work for DHS.

You are right and hesitating might have gotten him killed.