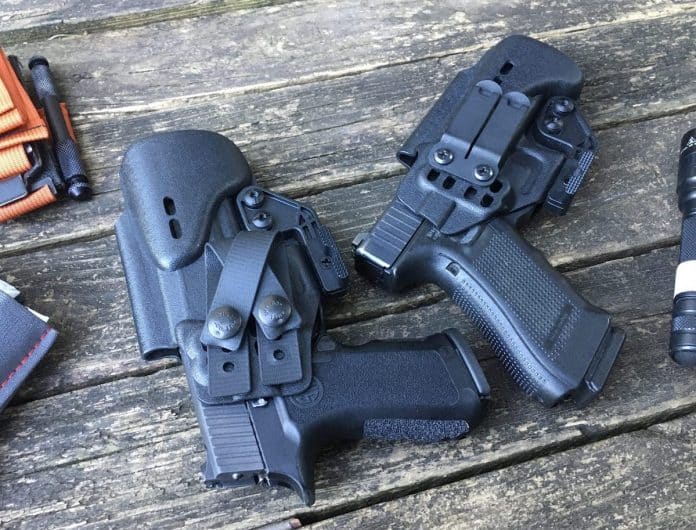 The PHLSTER Floodlight that I have reviewed before was a stroke of genius. It allows nearly any gun, with a Surefire X300 or Streamlight TLR-1 to be carried in the same holster. While not quite as universal, PHLSTER now has the Pro Series. Instead of a holster universal to the gun like the PHLSTER Floodlight, this holster is universal to the person. It can be used both AIWB or standard IWB, and is ambidextrous for right or left-handed use. There is also enough adjustment built into the holster that it should essentially be able to match any person’s needs.

What Comes in the Bag

There are a few things I look for in a holster, especially an AIWB holster. Number one is range of adjustment, both big and small. Small tweaks of ride height and cant are absolutely necessary with appendix carry. The Pro Series has two rows of slots on both sides of the holster to allow fine tweaks. Or jump from one row to the other to get a larger adjustment. There are also slots lower on the holster to allow for tuckable clips if that is more the end user’s speed. 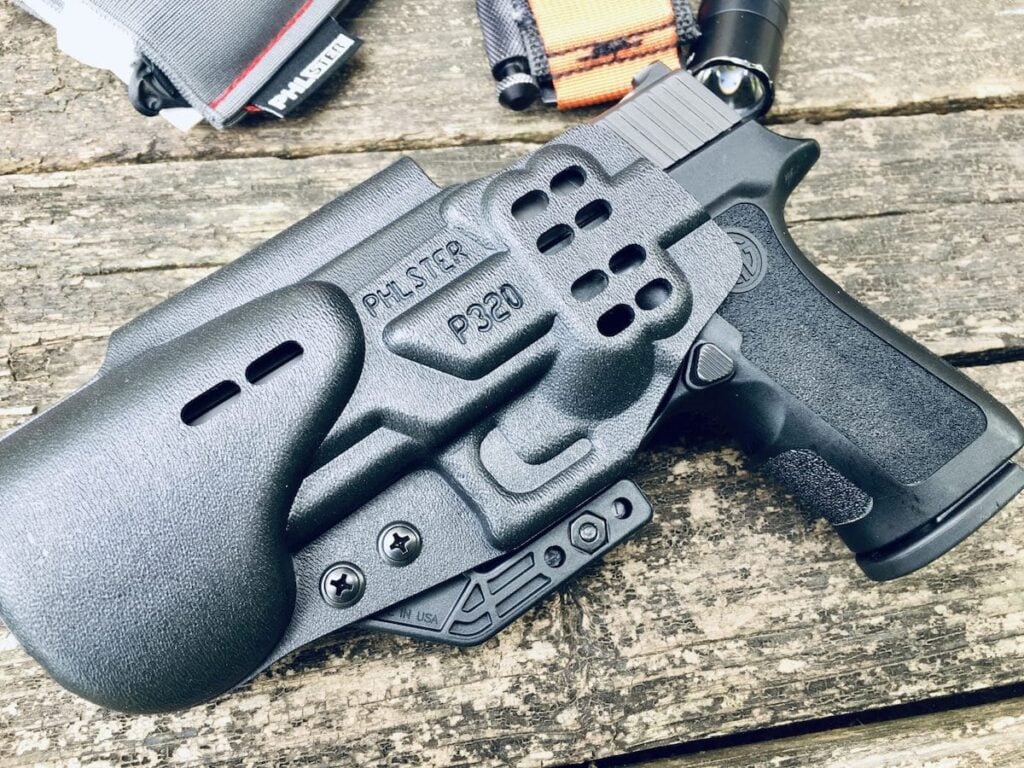 By default, the holster comes with pull the dot snap loops for right at $80.00. In that configuration, the holster is very serviceable. That is just the beginning though. The holster can also be ordered with a Tuck Strut, a Discreet Carry Concepts Monoblock clip, or Griphooks for an additional charge.

to each other. It is not an incredible amount of movement, and would likely vary depending on brand or type of belt being used. I was using a 1.5″ Graith Specialist during this review process. At most, it is just a mild annoyance.

The Griphooks, as far as plastic clips go, are probably the best plastic overhook style clips available. They are very secure and robust. The problem is they are bit bulky, especially compared to metal clips that are also available. When using the Griphooks with the Pro Series it also takes away some of the adjustability because one of the clips is mounted via the Modwing mounting holes. I found the standard snap loops provided with the holster to be a better solution than the Griphooks because of the ride height adjustment issue.

The Pro Series currently is available for full-size Glocks, the G48/43x, and Sig P320 Including models of the P320 with manual safeties. I would also add that the Sig P320 holster also fits the P250 quite well. I am sure as time goes by more fitments will be available. The holster is compatible with slide mounted optics as well, since that is the way the world is going. The retention is fixed, but it strikes a good balance between not too loose and not too tight. It also simplifies the holster being ambidextrous, and capable of being used in multiple carry positions. With fixed retention, the Modwing can be removed without needing any additional hardware to keep the holster secure.

What is that Thing

Looking at the holster, one of the most noticeable features is the rather bulbous looking muzzle end of the holster. If you have carried AIWB much, you probably know the value of having a wedge on the holster. It both aids in concealment by pushing the top of the gun back into the body, with comfort by keeping sharping edges off the body, and also adds a margin of safety. The wedge tilts the muzzle end of the holster away from the body. When combined with good holstering technique, this means the gun never covers any part of the wearer’s body as the gun is returned to the holster.

Normally, we would just see a wedge on one side of the holster, like with PHLSTER Classic holster. Since the Pro Series is ambidextrous, it has a molded wedge on both sides of the holster. One of Jon Hauptman’s goals with the Pro Series holster was to create the most comfortable holster possible by removing as many of the hard edges on the holster as possible. This includes the wedge design. While it may look weird, this is the most comfortable AIWB holster I have used. Considering I have used some pretty respected brands, that is saying something. I would stack the comfort level of this holster up against any other holster available on the market.

I have two versions of the Pro Series. Initially, I bought one for the full-size Glock. I needed a new Glock holster anyway. I liked it so much, I bought one for the Sig P320 a couple of weeks later. While the holsters are technically the same holster, they are also different. The version of the holster for the P320 is a touch bigger than the version of the holster for the Glock. The P320 is just a bigger gun, so it needs a little bit bigger holster.  Even though the Sig holster is a little larger in certain areas, I did not find it to be any less comfortable.

On the PHLSTERr Floodlight that I reviewed previously, one of my chief complaints was the absence of a full sweat guard. That is just a byproduct of having a holster that is designed for ambidextrous use. When carrying AIWB a full sweat guard makes it easier to safely get the gun back into the holster. On the Pro Series, even though the sweat guard is still a bit shorter than my personal preference, it is better than the Floodlight. Probably closer to a mid-guard type option than no guard at all. It is good enough that it wouldn’t keep me from buying this holster over some others that have full sweat guards, but it is a weak point.

Depending on what you need a holster to do, the Pro Series should be near the top of your list. If you want maximum concealment with a full-size handgun, I think the JMCK Wingclaw 2.0 with DCC clips still holds that title, although just barely. If you are willing to sacrifice a tiny bit of concealment for improved comfort or don’t want to mess with foam wedges that have to be periodically replaced, I think the Pro Series is the ticket. Another nice bonus is that the Pro Series is made to stock and not made to order. That means in most cases it ships the next day if not the same day, and will probably be on your doorstep in 3-4 business days. The shipping times are fast, by anyone’s standard. Beats having to wait 2 weeks or maybe even 2 months for made to order holsters.