Shooting from the Ground: An Overlooked Skill

Self-defenders often end up on the ground when engaged in a fight or when fleeing an attacker and the ability to fight while on your back is important. This ground fighting skillset with a handgun is often overlooked yet is important in this occasionally encountered defensive scenario. 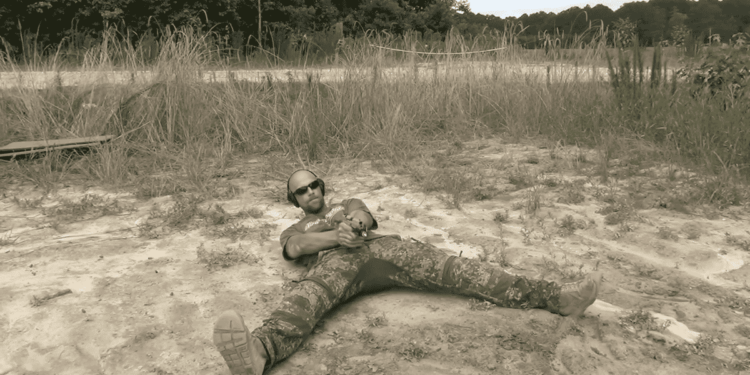 It is easy for most shooters to fall into the trap of overemphasizing conventional shooting stance. While practicing on the flat range, we tend to send most rounds down range while standing in a proper stance, a good two-hand grip on the gun, while maintaining ideal form. A quick perusal of video footage documenting actual shootouts clearly demonstrates that shooting stance is an abstract notion during such incidents. Rapid movement is the norm, and there is rarely anyone involved who stands still, let alone in a proper shooting stance.

Another component that is quite often seen when surveying such footage is how many people shoot from compromised positions. In particular, it is not uncommon to find defenders shooting from the ground as ending up on one’s back in a scuffle is very possible and likely. Yet, few shooters train for this scenario.

The likelihood of ending up on your back and on the floor is actually quite high in any sort of fight. Among martial arts practitioners there tends to be those who resist the notion of ground fighting and those who fully embrace it. Some fighting arts focus on intentionally bringing an opponent to the ground. Those who focus on self-defense realize that going to the ground is a very bad thing, but knowing how to fight if you end up there is vitally important since the chances of ending up there are high.

Unfortunately, this crossover to the shooting arena has not been as consistent. Defensive shooting is a fighting art, so the necessary techniques for shooting from the ground should be part of your skillset. There are many examples of self-defenders fleeing a threat and tripping and falling to the ground. The natural tendency to back-peddle away from a threat, which is tactically unsound, often leads to this. If you end up on your back with a gun in hand, you should know how to engage from this compromised position.

There are a number of things to consider when shooting from the ground to do so safely. Obviously, shooting yourself in the foot or the leg is not a good outcome no matter how desperate the circumstances. During the stress of a lethal force encounter, the likelihood of maiming one’s self goes up. Tunnel vision and general panic can lead to jeopardizing yourself in such a situation. The primary danger is the unintentional shooting of your own lower extremities. If shooting off to your sides or above your head (not often considered, but a possible scenario) while on the ground the risk of shooting yourself is minimal, but if shooting past your legs and feet the risk is significant.

For a long time, people were taught to shoot between their legs, while the legs were bent with the knees elevated. This is a technique that I discourage due to the risks and based on my research most trainers now teach against this. The sole benefit to shooting between the knees is that you can switch your body orientation by using your feet to turn yourself while on your back, but the actual act of shooting from between your legs is dangerous. I teach people to prone their legs out completely flat before firing the weapon. While shooting from between your raised knees might seem simple in a controlled range environment, there is too high a risk of shooting yourself through your femoral artery or knee during a fight.

If you are on your side on the ground, you will most likely need to shoot with a single hand. This position is less likely to pose an issue with flagging your legs. Nevertheless, you need to be conscious of sweeping yourself with the muzzle of the gun when handling the weapon under stress while in such compromised positions. In a scuffle, you may inevitably cover some part of your own body with the muzzle, so the primary safety during such an event is good trigger finger discipline. The finger should remain outside of the trigger guard and up along the slide of the gun at all times unless on target and firing.

Accessing your firearm while on the ground, if it is not already in your hand, can prove challenging and warrants some consideration. For example, if you wear your gun in a five o’clock position or somewhere behind your hip, the gun may prove impossible to get to if you end up on your back, especially if you face a contact distance struggle. A gun worn on the side of your hip or in the appendix position will prove more readily accessed in such a situation. Likewise, a gun carried in the pocket is exceedingly difficult to access once you have gone to the ground under the dynamic circumstances of a fight. Some force-on-force training with plastic guns can be very informative. If you have the opportunity, take some training in ground fighting techniques and test your ability to produce your weaponry while in compromised positions on the ground.

Likewise, weapon retention becomes a concern if you end up on your back with an assailant on top of you. An assailant that knows you are armed may try to disarm you, or you may run a significant risk of being disarmed if you produce the gun while in this position. When it comes to fighting on the ground, it is often more beneficial to use hand skills to create space or to gain a dominant position before producing a weapon. If you bring your own gun into play while under the assault of an attacker who is on top of you the end result may be having your own weapon used on you. These access and retention issues are really not clear until you have pressure tested them in force-on-force training, something that I highly recommend.

While this article is not a complete guide to shooting from the ground, it does highlight the most pressing concerns related to this subset of shooting skill. Shooting past your lower extremities is inherently dangerous, and I highly suggest that you become proficient with a dummy gun or airsoft gun before ever trying it with live ammo and this is a skill best practiced under the eye of an instructor. Also, give some thought to your method of carry and practice accessing your weapon from this compromised position.

Fighting Dirty: Self-Defense Requires It But Here’s What You Need To Know

Fighting Dirty: Self-Defense Requires It But Here's What You Need To Know