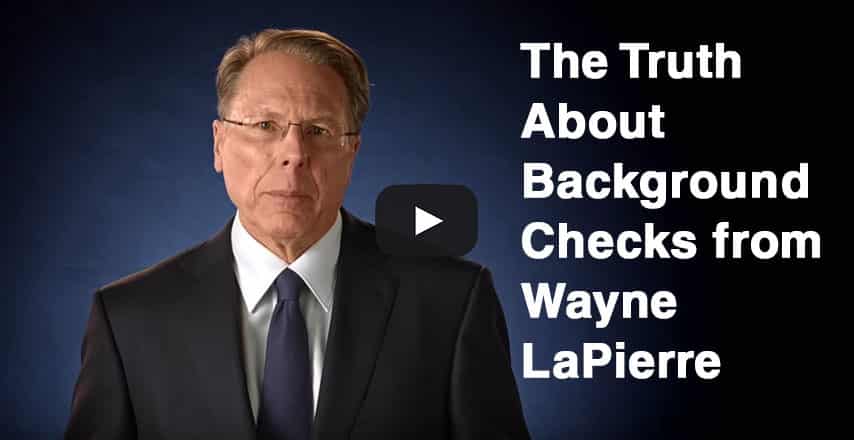 Wayne LaPierre, Executive Vice President of the NRA, released the following video on February 5th, 2015 in response to the Executive Action Obama plans on making on gun control.

In the video he mentions that mainstream media won’t say that the NRA fights for records of adjudicated mentally incompetent to be added to the National Instant Check System and that the NICS wouldn’t exist if it wasn’t for the NRA. Some of the problems he states are that millions of violent felons, criminals and adjudicated mentally incompetent are missing from the background check system, that 38 states report less than 80% of their felony convictions to the background check system and that in 2010, 80,000 prohibited people committed a felony by trying to buy a gun while only 44 were prosecuted for it.

This is a great video. And it just seems to prove that Obama and the anti-gunners just don’t seem to really know what good common gun sense really is or even looks like. Because they’d rather make more gun laws that they won’t enforce than to fix the current system. And to do the work to enforce the some 22,000 current gun laws that are already on the books.

back in 2013 our Vice President said the Justice Department was “just too busy” to prosecute background check crimes.

Wayne LaPierre needs to be careful with the “adjudicated mentally incompetent” schtick.

The Social Security Administration (SSA) has started the rule-making process to see if they can get benefit recipients who receive assistance managing their finances added to NICS as “mentally incompetent”. Because they have trouble balancing their checkbook or filing their taxes, or something.

Sorry, but some people just have trouble with math, and plenty of people have a hard time with ever-shifting tax regulations. That doesn’t make them dangerous, and adding them to NICS as “prohibited persons” on the SSA’s say-so (as opposed to a judge’s or a jury’s) is a serious due process violation.

I imagine some retired people who get ill, temporarily disabled or hospitalized, etc may sign up for this kind of assistance so they don’t lose their home during their disability, And because a regulation blind to the human condition people with no actual mental disability end up with a swat team taking their guns.

Remember the only way this regulation works for Obama is if the government has a gun registry. How else would they know to come for your guns.

Has Obama been secretly building an illegal gun owner database?

Well, the BATFE does keep all the 4473s from out-of-business FFLs. If you think someone hasn’t scanned and/or automated at least some of that, I’ve got some ocean-front property to sell you. In Nebraska.

Such a database isn’t even illegal, per se. Congress has merely said the ATF can’t use any of their apportioned funds to create it. I guarantee you, they already have the technology and tools to do it (probably obtained for other, legitimate uses), and scanning documents is so trivially easy that I could see a few “true believers” running the papers through during breaks or off-hours.

Given that they already have the tools and information, assuming that nobody at BATFE has taken the initiative of amassing it all together, whether officially or unofficially, is foolhardy at best.

And the problem with all registration skemes is they essentially require you by law, to testify against yourself.

If you must by law fill out and sign a form to exercise a right, it puts a huge elephant sized fly in the ointment for the government to use that information to procicute you at a later date.

This is why they don’t go after the 80,000 people who tried to buy guns but failed the NIC background check. Signing a form authorizing a check required by law, is problematic to prosecute, since there entire cases rests on evidence they compelled you to provide. If the right case was brought the whole gun control skeme of the left could be tossed out, because it clearly violates several aspects of the Constitution. It goes well beyond the second amendment. Thus the left never intended to prosecute the crime, or they’d risk losing the whole gun control paradigm.

The only value to a firearm owner registry is to harass lawful gun owners and pave the way for a totalitarian state that will ignore the whole Constitution and come for your guns.

You say that the video was released on Feb 5 of 2015. But the NRA on youtube says it was put there on Jan 5, 2016. And e-mails coming from the NRA direct also show that date.

But what he says is correct. Under 0bama the DOJ has failed to even go after the strawman purchasers when they are caught. No new laws needed, just a DOJ that enforces all the laws.

It’s because the NRA is in favor of gun control that many gun owners, like myself, will have nothing to do with them. Common sense gun laws look like this:

It is obvious that the political system is broken. Gun control is our topic today but every day you read about the governments dirty laundry. LaPierre notes that 80,000 people who failed the background check however only 44 were prosecuted. To be sure, there were some false/positives and other errors but still that number is outrageous! We need to look at our court system also. I am really steamed that judges are selected because of their political preference when they should be selected by how well they enforce the law and protect the people. Term limits? Oh yes, we need to end professional politicians. I am very much opposed to an agreement with the UN regarding the so-called “Small Arms Treaty”. I do not care what they do in Europe, Israel, Australia, England or the rest of the world. I believe that they will have more than a handful of problems with their new immigrants and may well need to be armed to protect themselves and their families.