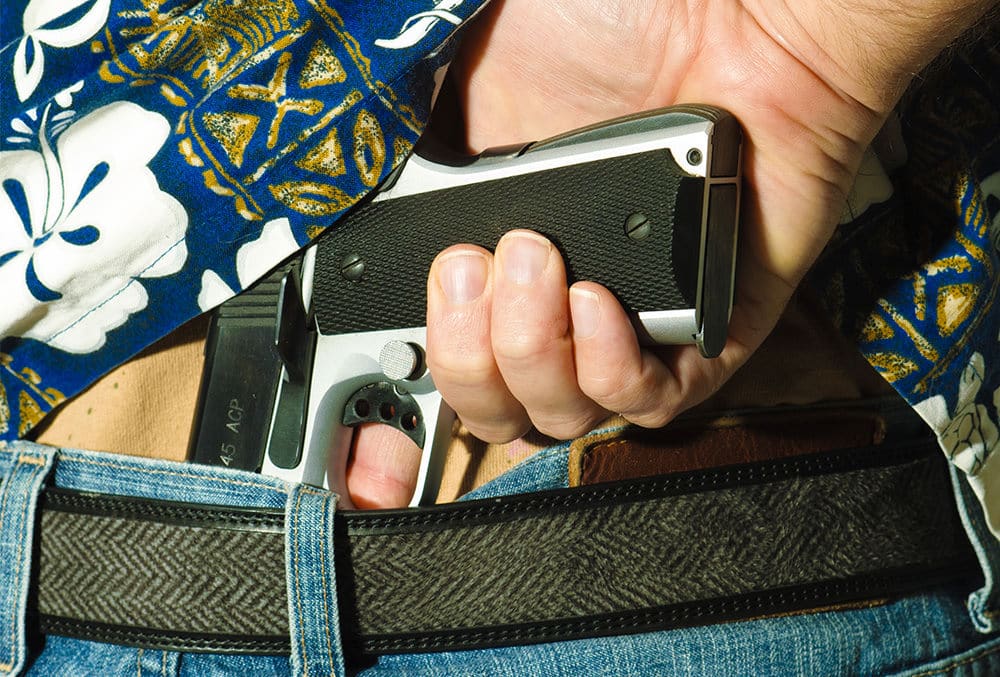 There’s a lot that goes into carrying a concealed weapon as part of your lifestyle. Finding the right equipment, and training with it are the first step. Learning your state’s laws and going through the process of getting the permit generally come next.  These are relatively easy portions of the road; they’re documented and understood and generally straightforward. As with everything, though, there’s a vast gulf between theory and practice. So here are some of the common mistakes, pitfalls, errors, and oversights that CCW—both newbies and old hands—occasionally blunder into.

Use a cheap holster.

Your carry system counts—a failure could be anywhere between embarrassing and catastrophic– so spend the time and money on quality. Check out our article 11 Things to Consider When Choosing a Concealed Carry Holster for more info.

Using improper carry and storage methods is a big no-no.

Shoving a gun in your belt or the back of your pants is never the preferred way of doing things. Ditto leaving it under the car seat while you duck in to work. There are better, safer ways to do this, and responsible gun owners find them.

Likewise, disobeying the relevant laws is out of the question.

As responsible members of the CCW community, it’s our collective responsibility to stay apprised of all the relevant laws and obey them. This is the agreement we make for the legal protections that come with the permit.

Don’t get lazy with it.

It’s very easy to become complacent when you carry an object every day—even if that object is a weapon. Follow the rules of gun safety to the letter.

Concealed means concealed, as I’ve said before and will say again.

Keep your weapon out of sight. While there’s a role for open carry where it’s legal, not all folks react well to the sight of a weapon. At the very least, printing or letting your weapon peek at the light of day can get you hassled.

On a related note to #5, stay discreet.

The “grey man” approach to life keeps you situational aware, inconspicuous, and out of trouble. With or without a gun, it’s to be recommended.

Shooting is a perishable skill, as are the various tactics involved in effective personal protection. Training, even just a little every day or week, makes a huge difference with the balloon goes up. Practice the skills you’ll need to keep yourself safe. (Read Also: 5 Ways To Be Constantly Improving Your Firearm Accuracy)

Your concealed carry piece is a tool in your toolbox, not a magical talisman that will keep you safe via its mystical powers. Use common sense, avoid areas where problems are likely to happen, deescalate if possible, and don’t neglect retreat as an option. Your judgment is your most powerful weapon and most useful asset.

There’s a saying I’ve seen batted around the internet and I think it’s true: “the gun is a tool, the weapon is the user.” CCW is a skill set to master and a mindset to embrace, and I hope that this brief list of considerations helps you along that path.

I’d like to hear your thoughts, so please get in touch. And stay safe out there.